We turned the curve

LaToya Cantrell, mayor of New Orleans, was discussing police actions and public safety on the MSNBC show, “All In with Chris Hayes”.  This is a mashup of “turned the corner” (begun to have improvement or success after a difficult or troubling period) and “ahead of the curve” (better than average).  Both idioms are about success or improvement.  Although the topic was not about the pandemic, “flatten the curve” (slowing down the spread of a disease) was probably on the speaker’s mind as well.  A big thanks to Frank King for hearing this one.  You can hear this malaphor at approximately 16 minutes into the show:

Trump is digging in his feet

Posted: April 3, 2020 | Author: davemalaphor | Filed under: Uncategorized | Tags: Ari Melber, dig your heels in, drag your feet, expressions, humor, language, malaphor, MSNBC, words | 1 Comment
This was heard on MSNBC’s The Beat with Ari Melber in a discussion of the coronavirus and the White House response.  This is a mashup of “dig in (one’s) heels” (resist stubbornly) and “drag (one’s) feet” (deliberately slow or reluctant to act).  “Dig” and “drag” sound similar and feet have heels so that contributed to the mixup.  A shout out to Frank King for hearing this one.

All of the enchiladas were placed on the table

Discussing the unfairness of the Iowa Caucuses, former RNC Chairman, Michael Steele on MSNBC uttered this malaphor.  It is a mashup of “the whole enchilada” (everything) and “lay (one’s) cards on the table” (to be very candid about one’s position).  My guess is that the speaker was hungry.  A big thanks to Ron MacDonald for hearing this one and sending it in.

Posted: February 1, 2020 | Author: davemalaphor | Filed under: Uncategorized | Tags: Frank Thorp V, humor, language, malaphor, malaphors, MSNBC, run the gauntlet, Trump, walk a tightrope, words | Leave a comment
This mashup was uttered by Frank Thorp V on MSNBC last Saturday.  It is a conflation of “walk a tightrope” (be in a situation where one must be extremely cautious) and “run the gauntlet” (enduring a series of problems, threats, or criticisms).  “Running” and “walking” might have led to the speaker’s confusion, or perhaps in the end the Democrats really had to run across that tightrope!  A big thanks to Frank King who heard this one and ran it in.

The Republicans run cover for Trump

Political pundit Charlie Sykes uttered this one on MSNBC’s Hardball (hosted by the Malaphor King, Chris Matthews – see website for the many contributions).  This is a mashup of “run point” (take the lead) and “give cover” (protect from attack).  Perhaps Mr. Sykes was thinking (or hoping) about “running for cover”, but there is no indication any Republican is doing that at this point.  A big thanks to Frank King for hearing this one and sharing it. 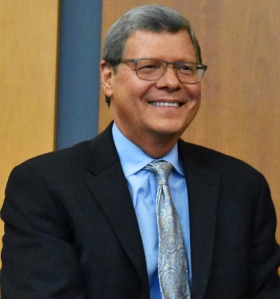 Get them off the stick AND on their back heel

Posted: September 2, 2019 | Author: davemalaphor | Filed under: Uncategorized | Tags: flat on my back, get on the stick off the dime, Jennifer Rubin, MSNBC, on my heels, Trump | 1 Comment

That’s right, a malaphor two-fer, from the lips of Jennifer Rubin, heard on MSNBC the other night.  Here is what she said:

On Republicans, “how many points will the Dow have to drop to …get them off the stick?”  This is a nice congruent conflation of “get on the stick” and “get off the dime”, both meaning to organize oneself and start preparing for something.

On Trump’s opponents, “he’s always thrived on chaos, …he thinks it puts his opponents on their back heel.”  This is a mashup of “back on his heels” (to put into a state of unease or surprise) and “flat on (one’s) back” (lacking the strength to get up).

A big, big thanks to Frank King for hearing these gems and passing them on!

They’re not holding any punches

Ayman Mohyeldin on MSNBC uttered this one when he was talking about Trey Gowdy and Republicans criticizing Democrats and Mueller’s testimony.  It is a congruent conflation of “not holding back” and “not pulling any punches”, both meaning to act without restraint or limitations.  The congruent conflation to me is the purest form of a malaphor.  The speaker is thinking of the correct idiom but there are other idioms that mean the same thing swirling in the brain.  A big thanks to Frank King for hearing this subtle but classic malaphor. @AymanM 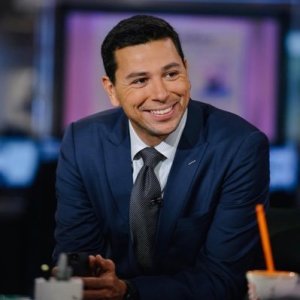 Joe Biden needs to get out and shake the flesh

This one conjures up a scary/humorous image.  Former House Rep Joe Crowley (D-NY) (who was unseated by AOC) said this beaut on MSNBC today.  He was asked if he had any advice for the Biden campaign and this was his answer.  It is a congruent conflation of “press the flesh” and “shake hands and kiss babies”, both meaning to go out and meet as many people as possible.  Mike Kovacs, Chief Operating Officer for Malaphor Central, heard this one and sent it in immediately.  Mike noted that there are several cheap jokes embedded in this malaphor.  Crowley lost to AOC, who as many will remember shook the flesh in a great dance video.  Also, Mike queried whether Biden at his age could shake the flesh considering the loss of elasticity, but I believe that actually works to Joe’s advantage.

Joe Biden can’t count all the chickens before they roost

Zerlina Maxwell said this on MSNBC’s Hardball recently. She was speaking about Biden and that since 21 Dems are running (and counting),  he can’t be sure he will get the nomination.  Ms. Maxwell actually uttered this same malaphor last year when she was talking about Democrats avoiding calls for impeaching Trump.  Here was my post:

Zerlina Maxwell on MSNBC’s “Live with Katie Tur” uttered this beauty when she was talking about Democrats avoiding calls for impeaching Trump.  This is a barnyard mashup of “don’t count your chickens before they hatch” (don’t make future plans before they happen) and “chickens come home to roost” (you have to face the consequences of your mistakes).  “Chickens” of course are the culprit here, contributing to the mental yolk.  These  fowl phrases seem to get mixed up a lot  – see “Never count your eggs before they hatch (July 9, 2012 post) , and “Might the roosters be guarding the henhouse?” (August 2, 2014 post).  I was eggcited when several people laid this one on me.  First was the ubiquitous Mike Kovacs, followed quickly by James Kozlowski and Bob Maxwell (no relation).  Malaphor spotters are everywhere it seems.

Zerlina, if you are following, please keep them coming.  We need to egg this process forward.  This is a favorite of mine.  The latest barnyard mashup was brought to you compliments of Beatrice Zablocki (“my ol’ pal”).