You have to run the whole board

Posted: August 31, 2020 | Author: davemalaphor | Filed under: Uncategorized | Tags: across the board, expressions, humor, malaphors, run the table, Trump, words | Leave a comment
This mashup was uttered by Trump in a rally in Wisconsin a few weeks ago.  He was talking about the 2016 election, and the states he needed to win.  Here is the transcript (around 24 minutes into his speech):

https://www.rev.com/blog/transcripts/donald-trump-speech-transcript-wisconsin-august-17
This is a congruent conflation of “run the table” and “across-the-board” (winning every game or opportunity).  The former expression comes from the game of pool and the latter is found in horse race betting.  Apparently Trump has used the phrase “run the table” correctly in the past.  See https://www.wsj.com/articles/running-the-table-from-pool-to-politics-1457106718
A big shout out to Frank King for hearing this one on the David Pakman Show.

We pulled out all the strings

This was heard on the CBS tv show “The Greatest #AtHome Videos”.  Cedric the Entertainer teamed with Kristen Chenoweth to surprise a group of young performers.  One of the performers uttered this nice malaphor.  You can hear it here:  https://www.facebook.com/watch/?v=785249305547779

It is a mashup of “pull out all the stops” (to do someting with maximum effort or ability) and “pull the strings” (to be in control of events or some other people’s actions).  “Pulled on our heart strings” might also be in the mix.  “Pull” is the common denominator here, and “strings” and “stops” are also similar sounding words, adding to the confusion.  A big thanks to Lou Pugliese who heard this one and passed it on.

The genie is out of the box

This is a nice bookend to another malaphor recently posted, “the genie is out of the bag” – https://malaphors.com/2020/06/17/the-genie-is-out-of-the-bag/.  It is also similar to “we can’t put the genie back in the box”, another malaphor posted on this site.  https://malaphors.com/2016/04/11/we-cant-put-the-genie-back-in-the-box/.  “The genie is out of the box” was uttered on CNN recently and also appears in an Axios article:

“We think the model has long-term viability,” says Barbieri. “The next California wildfire or earthquake or hurricane… now that the genie is out of the box, it’s never going back.”

It is a mash up of “the genie is out of the bottle” (something has been done that cannot be changed) and “opening Pandora’s box” (doing something that causes a lot of unexpected problems).  Both involve mythical creatures that cause trouble.  Also, opening Pandora’s box has a similar meaning to letting the genie out of the bottle.  Both are impossible to close once opened.  I also think the mix up is caused by the containers themselves – getting things from boxes and bottles.  It’s possible a jack-in-the-box was also on the speaker/writer’s mind.  A tip of the hat to Ginny Justice who heard this one and passed it on.

Democratic presidential nominee Joe Biden uttered this one in his speech last week in Dunmore, PA.  I believe this is a body part mashup of “close your ears (to something)” or “fingers in your ears” (ignore something) and “have (one’s) thumb up (one’s) ass” (not doing what you should be doing).   Not sure this one was on the teleprompter.  If not, perhaps Joe changed his mind mid- phrase when he was about to utter the word “ass”.   You can find the quote here:  https://www.politico.com/news/2020/07/09/joe-biden-economic-plan-355416

A big thanks to Fred Martin and Beatrice Zablocki for both catching this one live and sending a quick email to me.  I have a feeling that the next few months will bring an abundance of malaphors.  Keep your eyes and ears peeled!

We stemmed that curve

Posted: July 10, 2020 | Author: davemalaphor | Filed under: Uncategorized | Tags: Chris Hayes, flatten the curve, humor, language, Lena Hidalgoo, malaphors, stem the tide, words | Leave a comment
This is another “curve” malaphor brought to you by Frank King.  His last one was “we turned the curve”, heard on the MSNBC show “All In with Chris Hayes.  https://malaphors.com/2020/07/01/we-turned-the-curve/
This one was also heard on the same show, this time from Harris County (Texas) Judge Lina Hidalgo.  It is a congruent conflation of  “stem the tide” and “flatten the curve”, both meaning to stop the course of a trend or tendency.  You can hear this one on the Monday night, July 6, 2020 show.  It does not seem that the malaphor curve will ever be stemmed.  Another tip of the hat to Frank King for hearing this one.
Please do not stem the curve of the rising sales of my latest malaphor book, “Things Are Not Rosy-Dory”: Malaphors From Politicians and Pundits.”  It’s available NOW on Amazon. Click this link to purchase:  https://www.amazon.com/dp/B08C7GGMG5?ref_=pe_3052080_397514860

She’s the last person on the totem pole

The humorist H. Allen Smith used this phrase as the title of a book (1941) after the radio comedian Fred Allen had used the term to describe him in an introduction to an earlier book.  The position on an actual totem pole bu the way, has no such signficiance.  Nevertheless, the term caught on quickly enough to become a cliche.

A big thanks to Sam Edelmann who overheard this one and passed it on.
Don’t be the last person on the totem pole to get my latest malaphor book, “Things Are Not Rosy-Dory:  Malaphors From Politicians and Pundits”.  It’s available now on Amazon in paperback or kindle.  Let me tell you, it’s a real page burner!  Here’s the link:  https://www.amazon.com/dp/B08C7GGMG5?ref_=pe_3052080_397514860 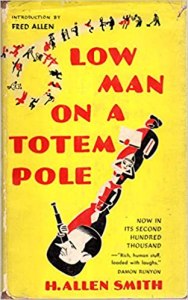 Introducing my new Malaphor book: “Things Are Not Rosy-Dory: Malaphors From Politicians and Pundits”

Posted: July 3, 2020 | Author: davemalaphor | Filed under: Uncategorized | Tags: expressions, humor, malaphors, Things are not Rosy-Dory, words | Leave a comment
Instead of a Friday malaphor, I am unabashedly promoting my new malaphor book, “Things Are Not Rosy-Dory: Malaphors from Politicians and Pundits”.  It is available on Amazon NOW for a cheap $8.99! Click on the link below.
Every bathroom library deserves this gem.  And what better way to celebrate America’s birthday than ordering this patriotic look at idiom mashups?  Even the cover is red, white, and blue!
Special thanks to Cheryl Rosato again for her fantastic illustrations that make the book so special. Also special thanks to Karen Michener MacDonald and Ron MacDonald from Step2branding.com for the terrific design of the book. And thanks to the many followers who contributed to the malaphors contained in this edition, and who are thanked at the end of the book.
You are all the top of the notch!
https://www.amazon.com/dp/B08C7GGMG5?ref_=pe_3052080_397514860 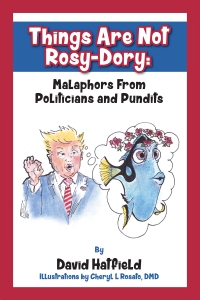