You can’t change back the clocks

In an interview on Sirius XM’s Radio Andy, Cameron Diaz was referencing growing old gracefully and said ” you can’t change back the clocks”.   http://site.people.com/style/cameron-diaz-taught-gwyneth-paltrow-how-to-use-a-blow-dryer-proves-shes-the-ultimate-celebrity-bff/

This is a nice congruent conflation of  “can’t change the past” and “can’t turn back the clock”, both meaning that you can’t make things the same as they were in an earlier time.   The phrase “change the clock” is often used when switching to daylight savings time and vice versa, so this might have been in the speaker’s mind.  A big thanks to Vicki Kovacs for hearing this one! 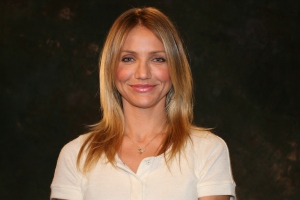 This is a mash up of “by any stretch of the imagination” (as much as anyone could imagine) and “by any means” (by any way possible).  Both phrases involve extremes, and share the words “by any”, hence the confusion.  A salute to Barry Eigen (who by the way is a stretch of the nice)  for hearing this one in a class and sharing it with us.

The shit hit the roof

Well, maybe in the Hitchcock movie “The Birds”, but in this case, the speaker was trying to say “the shit hit the fan” (when expected trouble materializes) and instead mixed it with “hit the roof” (get angry), creating a juicy (s0rry, wrong description), nice malaphor.  Thanks to Katie Hatfield for her malaphor contribution.

They made this up out of whole air

This is a mash up of “make something out of whole cloth” (fabricate a lie) and “into thin air” (vanish without a trace).  Thin and whole both describe size, which might contribute to the crossed wires.  “Hot air” (not sincere with no practical results) might also be in the mix, as the speaker of this malaphor was a lawyer.  Specifically, it was heard on “Dateline ID” with Lester Holt.  A a defense attorney criticized the prosecution’s description of the accused as a Jekyll-Hyde personality, and then uttered this malaphor.  A big thanks to my “ol’ pal”, Beatrice Zablocki for sending this one in.

This team never put their head between their knees

This phrase stands on its own, describing what one might do if one feels faint, but in context, it is a nice malaphor.  The speaker is Tom Seaver, discussing the 69 Mets team and how they came back from adversity and never quit.  Pretty sure he was mixing “not putting your tail between your legs” and “not hanging your head”, both expressions meaning not feeling ashamed or embarrassed.  “keep your head up” (feeling calm in the face of adversity) also seems in play here. Thanks to Steve Hubbard who heard this on the MLB Network regarding Cinderella teams.

These folks are trying to advance this niche of the pie

A subtle but proper malaphor, this is a mash up of “carve out a niche” (supplying a product for a particular segment of the market) and “a piece of the pie” (a share of something).  The mind might be visualizing carving a pie and hence the mix up.  Also both expressions concern a focus on a small part of a greater whole.  I think the next time I order dessert I will ask for a niche of pie, and see what reaction I get.  If the waiter quickly writes down the expression I will know the malaphor love is spreading.  A big thanks to Martin Pietrucha for hearing this one and sharing it with malaphor central.

I need to knock it out of the box

Posted: July 21, 2014 | Author: davemalaphor | Filed under: Uncategorized | Tags: baseball, blended idioms, expressions, humor, knock it out of the park, knocked him out of the box, language, malaphor, malaphors, mixed idioms, think outside the box, words | 2 Comments

“Think outside the box” is one of the most overused idioms in recent years, and so I was happy to receive this great malaphor mixing up that trite phrase.  This is a mash up of “think outside the box” (be creative) and “knock it out of the park” (did a great job).  There is also a baseball expression, “knocked him out of the box”, describing a pitcher leaving the game as a result of heavy hitting.  However, I don’t think that was in the mix given the context.  The malaphor was spoken on the Travel Channel TV show ‘American Grilled’.  One of the contestants, who needed to score big with the judges,  said “I need to knock it out of the box”, indicating that he meant to say “knock it out of the park”.   Score a home run for Michael Ameel, who sent this one in.

This one was heard on the NPR radio show, the Diane Rehm show, last week.  The speaker intended to say “double-edged sword” based on the context.  This is a mash up of “two way street” (reciprocal situation),   “cuts both ways”, and “double edged sword”, both meaning advantages and disadvantages.  Of course I am also reminded of those swiss army knives, with the various blades and devices all in one unit.   Thanks to Vicky Ameel-Kovacs for hearing and sharing this one!

I think I have put in my stripes

Subtlety makes the best malaphor.  When spoken, you pause and consider if  the phrase was correct.  It is a passing thought, because you will quickly forget it.  Today’s malaphor fits that bill.  The speaker was explaining why he should retire.  It is a mash up of “earned my stripes” and “put in my time”, both meaning hard work that deserves an award.  Kudos to Ed Brady for sending me this congruent conflation!

I don’t want to be a bandwagon fan

This malaphor is a mash up of “fair-weather fan” (someone who supports a team only when it is winning) and “jump on the bandwagon” (joining something only when it is popular).  It is a congruent conflation as both phrases concern a person who is being supportive of something or someone only because it is the popular thing to do.   This malaphor has evolved into an accepted phrase, apparently, as it can be found in Urban Dictionary and has been used by several people (e.g., Cuba Gooding Jr.).  Thanks to Katie Hatfield for uttering this one unintentionally and then recognizing it as malaphor worthy.