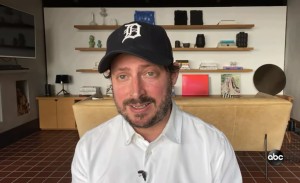 I am discussing these two malaphors together as they were uttered on the same topic and they are mashups of similar idioms.  The first, “straight from the hip”, was spoken on the Nicole Wallace show, Deadline: White House, during a discussion about Biden’s town hall and that he was speaking “straight from the hip”.  “Straight from the shoulder” (simple, direct, and forthright) is what the speaker meant to say, and this was mixed with  “shoot from the hip” (to speak rashly or recklessly).  The phrases are almost opposites, making this an excellent example of an incongruent conflation (unintentional blend of two or more idioms with opposite meanings).

The second malaphor, “shoot from the shoulder”, was uttered by Joe Biden at his town hall (and this is the phrase MSNBC had latched on in the malaphor above).  Herer is the quote:

“You’ve got to level with the American people — shoot from the shoulder. There’s not been a time they’ve not been able to step up. The president should step down,” the Democratic presidential nominee said to applause from a CNN drive-in town hall crowd Thursday night in Moosic, outside his hometown of Scranton.

This is also a mashup of “straight from the shoulder” and “shoot from the hip”, another incongruent conflation.  Body parts and alliteration are all responsible for these mixups.  A big thank you to Bruce Ryan, Pamela Pankey, John Pekich, and Kathy Meinhardt for all spotting the malaphor.

The straw that would tip me over to him

This one was spotted in a New York Times article, covering the Presidential race in Minnesota and Wisconsin.  Here is the context and quote:

Chris Rutherford, 51, of Minneapolis, is leaning back in Mr. Trump’s direction as a result of recent unrest. A Republican who said he was dismayed by Mr. Trump’s “constant lying,” Mr. Rutherford said he had been deeply troubled by the damage to his community inflicted first by the coronavirus pandemic and then by episodes of vandalism and rioting.

“Covid is wiping out these businesses and this was the nail in the coffin,” Mr. Rutherford said, stressing, “We cannot have these riots.”

Mr. Rutherford said that while he slightly favored Mr. Trump, he might still support Mr. Biden if he did more to warn of repercussions for people who “grotesquely violate the law.”

“He says, ‘I condemn,’ but he doesn’t ever say what he’s going to do,” Mr. Rutherford said, adding that if Mr. Biden went further it would be “the straw that would tip me over to him.”

This is a mashup of “the straw that broke the camel’s back”, “the last straw”, (both meaning the final problem in a series that causes one to finally lose one’s patience) and “tip the scales (or balance)” (something that upsets the balance such that one side gains advantage).  It’s almost a congruent conflation, as all the expressions refer to an incident or something that finally changes the situation.  As the contributor points out, “straws” seem to pop up in malaphors frequently.  Past examples include “it was the nail that broke the camel’s back”, https://malaphors.com/2016/04/06/it-was-the-nail-that-broke-the-camels-back/, “the last straw in the coffin”, https://malaphors.com/2012/11/22/the-last-straw-in-the-coffin/, “I’m at the end of my straw”,  https://malaphors.com/2013/04/12/im-at-the-end-of-the-straw/, and “that’s a bit of a straw horse”, https://malaphors.com/2019/04/29/thats-a-bit-of-a-straw-horse-isnt-it/.  Even one of my all time favorites, “let’s draw hats”, has the ubiquitous straw floating in the speaker’s mind.  A big thank you to Barry Eigen for noticing this one and sending it in.

Still thinking about buying the latest malaphor book, “Things Are Not Rosy-Dory: Malaphors From Politicians and Pundits”?  This latest malaphor might be the straw that tips you over.  Check it out on Amazon: https://www.amazon.com/dp/B08C7GGMG5?ref_=pe_3052080_397514860

There are people falling behind the crack

Jeannie Blaylock, a TV news anchor in Jacksonville, Fl, uttered this one when she was discussing the financial strain of COVID.   It is a congruent conflation of people “falling through the cracks” and “falling behind”, both meaning those who are not helped by the system which is supposed to deal with them.  “Falling” is the common word here, and is the cause of the mashup.  A tip of the crack to Lou Pugliese who heard this gem.

This flips the tables

This was spotted in a Washington Post Op-Ed piece by Greg Sargent, discussing Biden’s plan to produce more jobs in the United States.  Here’s the excerpt:

Biden, by contrast, will do what Trump didn’t: Use active, interventionist government to actually create jobs and rebuild U.S. manufacturing capacity. While there’s no question the left deserves credit in pushing Biden in this direction, his broader agenda has proved unexpectedly progressive.

“This flips the tables,” Jared Bernstein, a progressive economist and outside adviser to the Biden campaign, told me. “It doesn’t just block incentives to send jobs overseas; it creates new ones to create jobs here.”

This is a congruent conflation of “turns the tables” and “flips the script”, both meaning to reverse or change something dramatically.  If Sargent had really meant to flip tables, he might have been tempted to use one of many emojis expressing this – see  https://cutekaomoji.com/misc/table-flipping/

A flip of the hat to Mike Kovacs for spotting this perfectly formed congruent conflation.

I am slipping on my words

This tongue-tied malaphor should be the slogan for all malaphors.  It is a mashup of “tripping over (one’s) words” (speak unclearly) and “slip of the tongue” (an error in speaking).  “Stumble over (one’s) words” might also be in the mix.  Using the tongue to speak was clearly on the speaker’s mind when she confused slip and trip.  A big thank you to Doree Simon who uttered and sent in this mixup.

Stephanie Winston Wolkoff, former senior adviser to Melania Trump, was interviewed by Rachel Maddow.  Wolcoff was describing how Melania turned her back on her when the White House decided to throw Wolkoff under the bus for inaugurationgate:

Stephanie Winston Wolkoff told US journalist Rachel Maddow she had recorded her former friend to gain material for the book, but only once it was clear that Melania was not going to come to her aid in an investigation.

“If she was my friend that would be horrible, but Melania and the White House had accused me of criminal activity, had publicly shamed and fired me, and made me their scapegoat,” Ms Winston Wolkoff said.  “At that moment in time, that’s when I pressed record. At that moment she was no longer my friend and she was willing to let them take me down and she told me herself this is the way it has to be.

“That’s not how you treat a friend so I was going to do anything in my power to make sure that I was protected.”

“She turned her back, she folded like a deck of cards and I was shocked when she did it.”

This is a congruent conflation of “fold like a cheap suitcase” and “fall like a house of cards”, both meaning to collapse easily or a plan that is destined to fail.  “Fold like a card table” may also be in the mix, as it doesn’t have the word “cheap” in it.  This is similar to a prior posting uttered by Stormy Daniels’ lawyer, Michael Avenetti – “folded like a cheap deck of cards”.  https://malaphors.com/2018/04/10/hes-going-to-fold-like-a-cheap-deck-of-cards/ 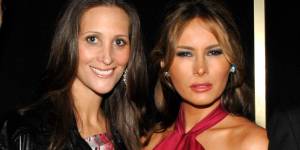 This terrific word blend was uttered by our Malaphorer-in-Chief at a rally in Michigan:

During his rally in Freeland, Michigan, Trump told the packed and largely maskless crowd that “Michigan gave us Motang,” then added “Gave us Motown, gave us the Mustang.”

You can hear the clip here:  https://www.mediaite.com/news/watch-trump-tells-crowd-michigan-gave-us-motang-and-twitter-has-a-field-day/

It is of course a mashup of Motown and Mustang, two things that Trump said Michigan gave us.  Word blends are a subset of malaphors.  They are unconscious blends of words to make an unintentional new word. The word sounds or looks correct at first blush, but then on closer examination is incorrect. Examples on my website are “Buckminster Palace” (Buckingham and Westminster, and/or possibly Buckminster Fuller) and “split-minute decision” (split second and last minute).  Word nerds might say these are portmanteaus, but a portmanteau is a combination of two (or more) words or morphemes, and their definitions, into one new word.

A big thank you to Bruce Ryan for hearing this one and sending it in immediately.  It is actually getting quite a buzz on Twitter.

This subtle little malaphor was found in a Washington Post article:

“This is going to force Joe Biden to come out of the basement, so to say,” said Robert Graham, a former Arizona Republican Party chairman. “People don’t just want ‘content.’ They want to see him out there.”

It is a congruent conflation of “so to speak” and “you might say”, both meaning to be said a certain way, even though the words are not exactly accurate.  Kudos to Bruce Ryan for spotting this one.

Posted: September 8, 2020 | Author: davemalaphor | Filed under: Uncategorized | Tags: Chris Hayes, expressions, humor, language, malaphor, narrow the gap, tighten the race, words | Leave a comment
Chris Hayes said this one on his MSNBC show on 9/1. discussing the Presidential race.  “It is possible for Donald Trump to tighten the gap…”  This is a congruent conflation of “narrow the gap” and “tighten the race”, both meaning to make closer.  A tip of the toque to Frank King for hearing this subtle one.