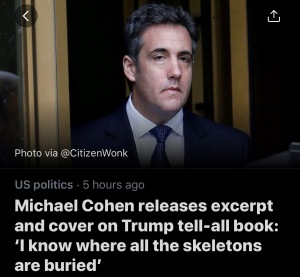 He knows where all the skeletons are buried

This was uttered by a guest on MSNBC’s Live with David Gura on Saturday September 15.  It is a nice conflation of “skeletons in the closet” (embarrassing or shameful secrets) and “knows where all the bodies are buried” (know everything about someone, especially secret things that they might not want revealed).  Bodies become skeletons when buried and rotting in the ground; hence the mash up.  Also both expressions involve secrets.  A big thanks to Frank King for hearing this one and dishing it up. 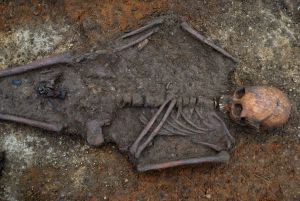 That will bring some skeletons crawling out of the woodwork

This is a delightful mixture of “skeletons in the closet” (secrets) and “crawling out of the woodwork” (secrets coming out in the open).  The confusion lies in the two phrases referring to secrets and exposing them.   I heard this in a conversation but I cannot reveal the source as I was sworn to secrecy.  We can’t have these malaphors crawling out of the woodwork, can we?

Don’t air your dirty laundry in the closet

Certainly words of wisdom.  This is a mash up of “don’t air your dirty laundry” (don’t reveal secrets publicly), “out of the closet” (a secret revealed to the public) and “skeletons in the closet” (deep secrets one does not want revealed), all referring to secrets.  And of course dirty laundry often is collected in hampers in the closet so laundry and closet are word associations.   On the other hand, maybe the speaker was being literal and recommending that dirty laundry in a closet will eventually make your closet smell….doubtful.