This ditty was uttered on July 20 by Stephanie Ruhle on MSNBC’s “Velshi and Ruhle”.  It is a nice congruent conflation of “at arm’s length” and “keep at a distance”, both meaning to keep someone from becoming too close.  Perhaps a “distance” is farther than an “arm”?  I imagine that fits in this context.  A big thanks to Frank King, the Mental Health Comedian, for hearing this one and sending it in.

We haven’t emptied all our cards

This was uttered by Michael Avenatti on the Lawrence O’Donnell MSNBC show when he was asked whether there will be any further disclosures regarding Michael Cohen.  It is a mashup of “show (one’s) cards” (to make one’s plans or intentions known) and “empty (something) out” (to remove or pour all of the contents from something).  Revealing and then emptying seems to be what he has done to date, so the malaphor makes sense.  This is not the first malaphor uttered by Michael Avenatti.  Check out some of his other great mashups, like “he folded like a cheap deck of cards”.  A big thanks to Beatrice Zablocki for hearing this one.  She’s a major contributor to this site. She’s the top of the notch!

Trump will do anything to avoid that rock being peeled back

This gem was uttered by Donny Deutsch, American ad executive and television personality, on “Morning Joe”.  He was referring to potential documents by Trump’s personal lawyer that could reveal past business dealings.  It is a congruent conflation of “rock being turned over” and “onion being peeled back”, both meaning to uncover something that is concealed.  This was uttered around Easter, so perhaps Mr. Deutsch had the resurrection image in his mind.  Certainly the similar phrases “peeling back” and turning over” added to the confusion.  A big thanks to Mike Kovacs for hearing this and sending it in. 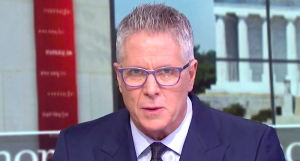 This nice, subtle malaphor was uttered by Harry Litman, former US Attorney, on the MSNBC show Deadline: White House.  Mr. Litman was talking about the Southern District of New York and its toughness on criminal activity, specifically referring to Michael Cohen’s possible involvement in criminal actions.  It is a congruent conflation of “take no prisoners” and “give no quarter”, both meaning to show no mercy or compromise in pursuing one’s objectives.  “Taking” and “giving” often get mixed up, it seems, as it is difficult sometimes to understand why one word is used and not the other.  For example, the expression “I need to take a piss (or dump)” makes no sense to me as one is really “giving a piss (or dump)”, right?  Conversely, the phrase “I don’t give a hoot (shit)” about something makes more sense if you “don’t take a hoot (shit)”.  Word rant of the day.  A big thanks to “my ol’ pal” Beatrice Zablocki for giving a hoot about malaphors and spotting this one.

He’s going to fold like a cheap deck of cards

I had to put this one at the head of the line.  This gem was uttered by Michael Avenetti, Stormy Daniels’ lawyer, on MSNBC’s “The Beat”.  He was referring to Michael Cohen, Donald Trump’s personal lawyer.  Here is the context:

“I think when push comes to shove he’s going to fold like a cheap deck of cards, I really do,” Daniels’ lawyer, Michael Avenatti, told MSNBC’s “The Beat” on Monday night.  https://www.nbcnews.com/politics/donald-trump/trump-s-attorney-michael-cohen-will-fold-cheap-deck-cards-n864241

This is a congruent conflation of “fold like a cheap suitcase”  and  “fall like a house of cards”, both meaning to collapse easily or a plan that is destined to fail.  Regarding the “cheap suitcase” idiom, the Free Dictionary explains:  “expensive luggage was made from well-constructed leather or fabric.  Cheap ones used to be made of cardboard with little or no structural reinforcement, not very sturdy especially when manhandled by baggage handlers or hotel porters.  You also hear “fold like a cheap suit”, but since fabric folds easily, whether it’s cashmere or polyester, “suitcase” presents a better connotation of a losing proposition.”

Mr. Avenatti’s is particularly sweet, as he combines the image of a cheap deck of cards with folding.  A poker player with a losing hand would certainly fold but “like a cheap suitcase”, although I suppose there are cheap enough cards out there that bend easily.  Casinos would not use them.

I think the mashup was also caused by the word “suit” in the proper idiom, with the speaker associating “suit” with “cards”.  A big thanks to Jim Kozlowski for spotting this one first and sending it in.  I had many people send it in as well, but Jim was the first so he gets the malaphor kudo.

Michael Cohen is in hot soup

This subtle malaphor was found at Slate.com.  Here is the full quote: “That might seem like a pretty shaky defense, even if Cohen really used his home equity line to get the funds as he claims, but it turns out to be no defense at all. Cohen should be in hot soup either way.” https://slate.com/news-and-politics/2018/03/if-michael-cohen-is-telling-the-truth-about-his-stormy-daniels-payment-he-can-be-disbarred.html

“In hot soup” is a congruent conflation of “in hot water” and “in the soup”, both meaning to be in trouble.  Perhaps this conflation means the person in question is REALLY in trouble.  The mix stems from the liquids “water” and “soup”.   Soup can be served hot or cold, but in this case it is scorching hot.  A tip of the hat to Barry Eigen for spotting this gem.

You will not be in hot soup purchasing THE book on malaphors, “He Smokes Like a Fish and other Malaphors”, available on Amazon today for a cheap $6.99.  Check it out at https://www.amazon.com/dp/0692652205