You can look it up in your Strunk and Wagnalls

Not quite Rowan and Martin. The submitter’s wife uttered this nice word blend, which is a conflation of “Funk and Wagnalls” (dictionary/encyclopedia) and “Strunk and White” (American English writing style guide).  The Funk/Strunk rhyming is obviously the culprit here.  A big thanks to Martin Pietrucha for hearing this one and sending it in.

If you want to look up “malaphors”, purchase the malaphor book, “He Smokes Like a Fish and other Malaphors”, on Amazon.  Makes a great stocking stuffer (or fire starter). 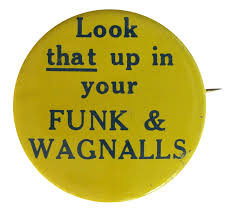 Bill Goldberg, host of the History Channel’s “Forged in Fire” uttered this word blend malaphor when describing a particular sword.  This is a congruent conflation of “powerhouse” and “workhorse”, both describing a person or thing having great energy or strength.

Word blends are a subset of malaphors.  They are an unintentional blending of two or more words.  If you type word blend in the search engine on this blog or go to the index and scroll down to Word Blends you will see the many word blends I have posted.  Some examples are “Buckminster Abbey” (Buckingham Palace and Westminster Abbey and maybe Buckminster Fuller), and “blinched” (flinched and blinked).  The word blend malaphor is different than the portmanteau.  A portmanteau is an intentional blend of two words to create a new word with its own definition.  An example is smog (fog and smoke).  Word blend malaphors are simply mixed up words with no separate definition and are said unintentionally.  I hope you enjoyed my wordplay lesson of the day.

A big thank you to Anthony Kovacs for hearing this word blend and sending it in. 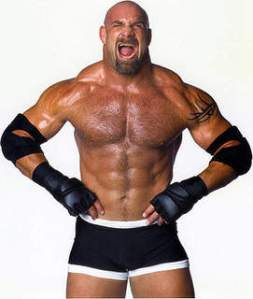 I was trying to buttercoat it

From the submitter:  “My coworker just said this when complimenting my singing. He used an expletive the first time, but when he repeated it, he used a euphemism in place of the expletive. When I said, “That’s not what you said before,” he said he was trying to buttercoat it, not realizing that he was mixing two expressions. When I told him that what he just said is a malaphor of butter up and sugarcoat, he said that it perfectly conveyed his sentiment.”

This is a great word blend of “sugarcoat” (palatable, or easy to take) and “butter up” (to be nice to someone by flattery or other means).  I think this should be a new phrase in the lexicon, and the above situation is a great example.  A big thanks to Diana for sharing this one!

The speaker meant to say “package” but this came out.  It is  a nice word blend malaphor  of “box” and “package”.  Since most packages in the mail now come in boxes, thanks to Amazon and the internet, “bockage” was eventually going to be spit out by someone.   And really, isn’t it a nice word?  Sounds like the lord of the manor pronouncing “package”.  Also could be used when there are delays in shipping:  “Sorry, we have a bockage right now”.   A big thanks to Martin Pietrucha who accidentally blurted this one out and shared it immediately!

If you like this word blend check out my book on malaphors entitled “He Smokes Like a Fish and other Malaphors”, available on Amazon.  Just click this link:  http://www.amazon.com/dp/0692652205.  There’s a whole chapter devoted to word blends, which are not portmanteaus, by the way (explanation in the book!). 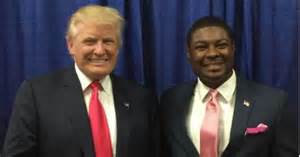 Rusty is cowarding in the bathroom

Linda Bernstein, loyal malaphor follower, related this one from the Fourth of July. Fireworks were being set off all around, and Rusty the dog hid away in the interior bathroom to get away from the loud noises.    Her grandson Nick then exclaimed that “Rusty is cowarding in the bathroom”.    This is a nice word blend of cowering and coward.   Cowards do often cower, and the words sound similar, so the mix up is a perfect blend.    As many of you know, most malaphors are idiom blends but once in awhile two words are blended together to make a nice word blend malaphor.  These are very different than portmanteaus, as I have explained in previous posts.  A hat tip to Linda Bernstein for sending this beauty in!

A spin on MLK’s famous speech?  No, but a pretty good word blend,  combining “quandary” (dilemma) and “conundrum” (a puzzle).  As I have explained in previous posts, single word malaphors are different than portmanteaus.  A portmanteau is an intentional blending of two words to form a new word with a specific meaning, such as “smog” (a blend of smoke and fog).  A single word malaphor is an unintentional blending of two words to create a new word that is incorrect, such as “Buckminster Palace” (Westminster Abbey and Buckingham Palace), or a “faceover” (makeover and facelift).  Interestingly, Quandrum is the name of a Belgian Ale brewed by the Barrel of Monks brewery located in Boca Raton, Florida.  It is described as a “quadraphonic Belgian style quadrupel aged several months in rum barrels”.   Cheers!   A big shout out to Tiffany G. for hearing this one and passing it on!

Want to know more about single word malaphors?  Buy my book, He Smokes Like a Fish and other Malaphors.  An entire chapter is devoted to these little gems.  Available now on Amazon at http://www.amazon.com/dp/0692652205 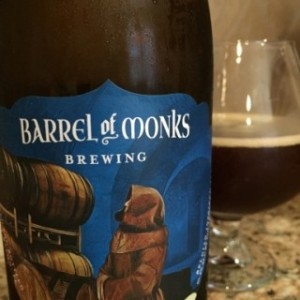 This is a mash up of the expressions peachy keen and hunky-dory, both meaning fine or satisfactory.  This seems to be a fairly common malaphor, based on internet hits.  Now hunky keen is a different matter….Thanks to Char Stone for sending this one in!

Our salt supplies are deplenished

This is a word blend of “depleted” (to use up or empty out) and “replenish” (to fill up).  Since REplenish means to fill again, then it is reasonable to assume DEplenish would mean the opposite.  I heard this one on the Pittsburgh CW 10:00 news,  in a discussion of salt supplies in Cleveland.  Although malaphors are generally mixed phrases or idioms, they can appear as mixed words or word blends as well.  See my other word blends in the category list under Word Blends.

This hotel needs a faceover

Okay, I admit saying this one.  While visiting Miami on business this week, I remarked to a colleague that the hotel I was staying in was very nice but was showing its age, and then blurted the above.  I  silently screamed Malaphor!  and immediately wrote it down.  As you know, the best malaphors are quickly forgotten because of their subtlety.   Faceover is a one word blend of “facelift” and “makeover”, both indicating improved cosmetic changes.   I actually like the word faceover as it is a good description of any rehab project.  I would encourage everyone to start using it.  Now if the subject matter was a hockey arena, it might be a triple blend with faceoff in the mix….