He (Obama) starts signing them (Executive Orders) like they’re butter

This beauty was uttered by Donald Trump in April 2016 when he was on the campaign trail.  He was talking about Executive Orders, and how he was not going to use that vehicle to get things done, unlike then President Obama:

“Executive orders sort of came about more recently. Nobody ever heard of an executive order, then all of a sudden Obama — because he couldn’t get anybody to agree with him — he starts signing them like they’re butter, so I want to do away with executive orders for the most part.”   http://thehill.com/policy/energy-environment/331134-trump-using-executive-orders-at-unprecedented-pace

Of course we all know now Trump used the Executive Order process at an unprecedented pace in his first 90 days.   This is a mashup of “to go/cut through something like a (hot) knife through butter” (to do or cut something very easily) and “selling like hotcakes” (to sell quickly and in large numbers).  While “sell” and “hotcakes” are not in the malaphor, I believe he was thinking of this idiom when he uttered the mix up, confusing “selling” for “signing”.  Kudos to Karl Robins for spotting this one as he saw it on Seth Meyers’ 4/26/17 monologue. 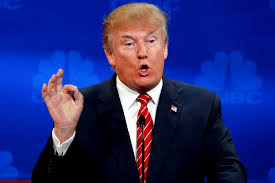