It was on the cards

MSNBC chief global correspondent Bill Neely uttered this one.  He was talking about the recent release of the U.S. prisoners in North Korea and said that the release had been “on the cards” for awhile as they were moved to a hotel before release.  This is a congruent conflation of “in the cards” and “on deck”, both meaning certain or likely to happen next.  The mental mashup origin is clear in this one: the speaker probably was thinking “deck” which led him to “cards” as in “deck of cards”.  Also in the mix might have been “on the radar” (considered important or noteworthy) considering the context.    A big thanks to Bruce Ryan for hearing this one and sending it in! 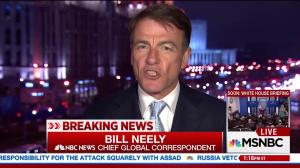