Bills’ McDermott starting to look over his head

This malaphor headline comes to us from the Olean Times Herald: http://www.oleantimesherald.com/sports/pollock-bills-mcdermott-starting-to-look-over-his-head/article_5bf52096-cfe4-11e7-9e3a-1b4137e0f0fe.html

If you clicked on the link, you will see that the author of the article inadvertently mentions the two sources: “in over your head” (too deeply involved in a difficult situation) and “looking over your shoulder” (insecure or anxious about a potential change).  This is another classic “head/shoulders” mash up.  I have posted numerous others.  A shout out to John Costello for spotting this one. 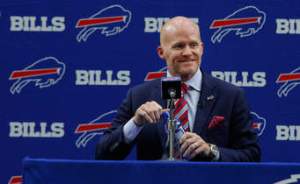 I was slapped down with a little humble pie

Interesting origin to the phrase “humble pie” – The “humble pie” that we eat when we make a misjudgment or outright error was originally “umble” pie made from the intestines of other less appetizing animal parts. Servants and other lower-class people ate them, as opposed to bettercuts. “Umble” became “humble” over the years until eating that pie came to mean expressing a very meek mea culpa. A similar phrase is “eat crow,” the bird being as unpalatable a dish as one’s own words.  From the Free Dictionary.

At least you went down guns loaded, or guns blown, whatever.

Since it is NFL football Sunday, I thought I would share this nice little malaphor uttered by the Buffalo Bills quarterback, EJ Manuel.  After being benched in favor of Kyle Orton, he made it clear that he wants another chance.

“You don’t worry about the repercussions. If something happens, at least you went down guns loaded, or guns blown, whatever. You just go out there and let it rip. That’s what I’ve been practicing out there this week, against our defense, so just allowing myself to go out and make plays naturally.”

This is a mash up of  “went down fighting” and “go down with guns blazing”,  both meaning putting up a fight.  The malaphor results in exactly the opposite meaning – went down with guns loaded, i.e., did not put up a fight.   The “whatever” perhaps was an exasperated searching in his mind for the correct idiom.  That happens to me a lot.  Whatever.    A big thanks to John Costello for hearing this one and passing it along.  The sports world comes through again!