Everybody takes it as whole cloth

This was uttered by President Trump’s press secretary, Sean Spicer, at the May 9, 2017 press conference.  He was responding to a question about James Clapper’s testimony in front of the Senate Intelligence Committee involving Russian interference in the last US Presidential election.  Here is what he said:

MR. SPICER:  Sure, I mean, in the sense that I’m not going to question.  But I think the interesting thing is on all the other issues that he testifies about everybody takes it as whole cloth, that if he says anything he must — he was the DNI.  So when you guys want him to speak for the entire 17 agencies, you sort of assume that that’s what he’s doing.

Considering the context, this is a mash up of “cut out of whole cloth”, meaning completely fictional or utterly false, and “takes (something) as gospel”, meaning believing something that is undeniably true.  Mr. Spicer switched these, and thought I guess that “whole cloth” means it’s true.  I wonder how he would describe some of the President’s tweets?  Interestingly, the phrase “cut out of whole cloth” is a reference to tailors who would falsely advertise garments being “cut out of whole cloth,” when in reality, they were pieced together from different cuts.  A big thanks to that Malaphor Man on the Street Mike Kovacs! 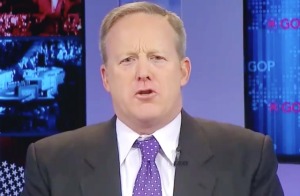