He’s barking up the wrong horse

This one was almost uttered and then held back, apparently realizing it was wrong.  It is a nice mashup of “barking up the wrong tree” (to attempt a futile course of action) and “backing the wrong horse” (to support a person in an effort that fails).  Both phrases involve failure, and “barking” and “backing” sound and look similar, hence the mix up.  Also, the word “wrong” is in each idiom, contributing to the mental hiccup.  As I have posted previously, idioms involving horses for some reason are frequently mixed up, causing malaphors.  Go to the Malaphors web page and search “horse”.  You will find a treasure trove of malaphors.  As Kramer would say, “Giddyup!”  A big thanks to John Kooser for almost belching out this one. 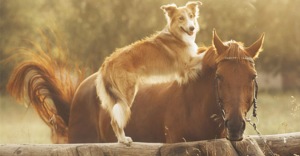