We are not out of the clear

This dandy conflation comes straight from the mouth of Senator Kamala Harris (D-CA) on MSNBC’s The Rachel Maddow Show.  She was discussing Russian interference in the U.S. Presidential election and explained that “we are not out of the clear”.  This is congruent conflation of “out of the woods” and “in the clear”, both meaning to be free from danger or suspicion of wrongdoing.  This malaphor was repeated by MSNBC on its twitter feed: Sen. Kamala Harris: “We’re not out of the clear in terms of 2018 election cycle” https://twitter.com/MSNBC/status/952057691974881280

Many followers caught this one, including Beatrice Zablocki, Sam Edelmann, and Frank King.  I guess this one was very clear. 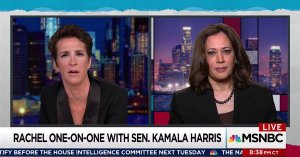