Not to beat this horse into the ground, but….

Posted: May 6, 2016 | Author: davemalaphor | Filed under: Uncategorized | Tags: beat a dead horse, expressions, humor, language, malaphor, malaphors, run into the ground, words |1 Comment
This gem was heard on a podcast by one of my favorite contributors, Marcia Riefer Johnston.  This is a mash up of “beat a dead horse” (to waste time doing something that has already been attempted) and “run into the ground” (use something so much that it does not work anymore).  Both expressions deal with the idea of overusing something which was the speaker’s point.  Marcia believes the speaker was mushing the idioms together to avoid an out-and-out cliché.  I think that often happens.
By the way, horses seem to be a popular subject for malaphors.  For example, I have posted recently “don’t look a gift horse in the can” and “you can’t beat that with a dead horse”.  Others include “I’m cursing like a race horse”, “that’s a horse of a different story”, “he’s a black horse in all of this”, and “I don’t want to reinvent the horse”.  When I told Marcia this, she replied that her husband suggested they be called “maraphors”.  I think that is an excellent idea and will add it as a specific category to the website!   Thanks to Ray Johnston for the punny suggestion and for Marcia Johnston for sending this maraphor in!
If you liked this one you’ll LOVE the malaphor book just published:  “He Smokes Like a Fish and other Malaphors”, available on Amazon in the US at http://www.amazon.com/dp/0692652205, Canada at  http://www.amazon.ca/dp/0692652205, and the UK at   http://www.amazon.co.uk/dp/0692652205. 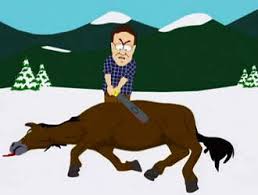 One Comment on “Not to beat this horse into the ground, but….”