Another gem from Rachel Maddow, the “Mistress of Malaphors”.   She uttered this on her Friday, June 8, 2018 show, discussing the indictment of Konstantin Kilimnik and his past relations with the International Republican Institute:

Well, now those new felony charges today have been filed. Instead of
facing 23 felony charges, Paul Manafort, the Trump campaign chairman, is
now facing 25 felony charges. What ended up being the big surprise here
today is that Paul Manafort wasn`t just charged alone, the superseding
indictment wasn`t just for him, he was charged alongside Konstantin
Kilimnik, Kostya from the GRU, the guy who back in the day in Moscow was
suspected of narcing out this American pro-democracy outfit that the FSB
denounced as an enemy of the state after they somehow got a hold of the
internal workings of that organization.

This is a congruent conflation of “narc on” and “rat out”, both meaning to give authorities information on a crime, or to inform on someone.  A big thanks to Frank King for hearing this one and sending it in. 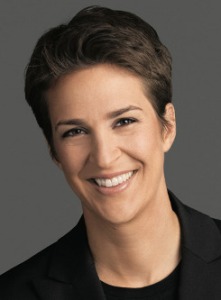