She is dumb as a brick

Steve Bannon, the former White House chief strategist, called Ivanka Trump, the president’s eldest daughter and top White House adviser, “dumb as a brick” in journalist Michael Wolff’s new book, “Fire and Fury: Inside the Trump White House, according to The Wall Street Journal, which reviewed a manuscript of the book on Wednesday.  https://www.aol.com/article/news/2018/01/03/steve-bannon-says-ivanka-trump-is-dumb-as-a-brick/23323301/

This is a nice congruent conflation of “thick as a brick” and “dumb as a rock (or post)”, both meaning someone incredibly stupid.  Perhaps the person doing the name calling should reflect on his own intelligence, considering his bungling of idioms.

The phrase reminds me of the title of Jethro Tull’s fifth album, “Thick as a Brick”, released in 1972.  It is considered today as one of the classics of progressive rock.  Perhaps Bannon was listening to this album when he uttered his remark.

A big shout out to Mike Kovacs for spotting this timely beauty. 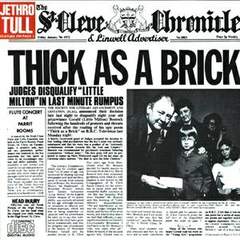